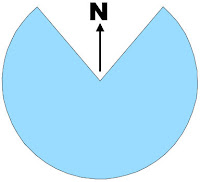 Fig SS1: First of all, consider this: Breaking free of the horizon 40-degrees from north at Stonehenge, this is the maximum area of sky that the moon ever gets to scan, and does so for several months every 18.6 years. This, the moon’s most northerly point of rising is called the Major Standstill. The next Major Standstill will occur in 2006, and if cloud free, should be quite an occasion for photographers! 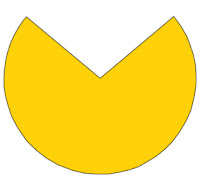 Fig SS2: This is the maximum amount of sky that the sun ever manages to scan at Stonehenge. The sun breaks free 50-degrees clockwise from north and scans a total of 260-degrees on solstice day every year on the 21st June. Everyone who visits Stonehenge on solstice morning to see the sunrise looks out along this 50-degree angle from north. 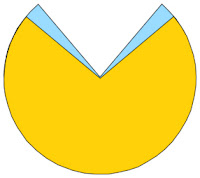 Fig SS3: But look what happens when we place the sun-arc on top of the moon-arc - the moon commands a small section of sky (about 10-degrees) that the sun never gets to visit! - Not ever! 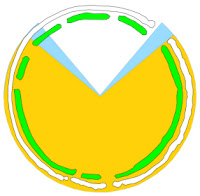 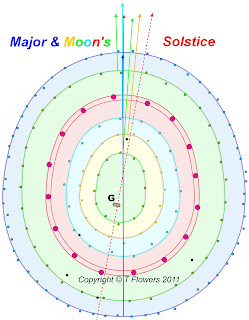 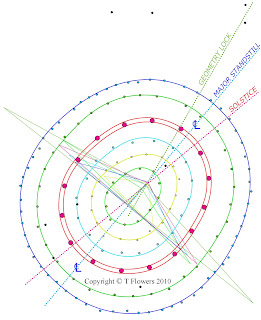 Figures 2 and 3 above are the results of a privately funded GPS survey made in 2008.


Fig 2 shows Woodhenge as it actually is when correctly oriented to north. The triangles that its geometry is founded upon are also shown. Some of these founding triangles are Pythagorean, others are not. Good effect was made by converting the metric GPS measurements into Professor Thom’s megalithic yards at the rate of one megalithic yard equalling 0.8297 metres. Woodhenge’s geometry can be seen to be locked in place by a line that passes between posts one and two seen in the top right-hand corner of the plot.


Fig 3 is rotated anticlockwise 40-degrees to match the major standstill of the moon. Rotating Woodhenge in this way makes it very clear that its major axis of symmetry points at the moon - not the sun, as archaeologists would have us believe.


Two supernumerary posts were placed to guide a shaft of solstice sunlight down a corridor causing it to illuminate the grave of a child. Professor Thom threw a spanner in the works by ignoring this corridor proposed by Woodhenge’s original excavator Mrs Maud Cunnington, and claimed a more northerly solstice aimed on the very first glint of the sun…. something we now know is wrong. The real corridor is aligned on half-orb as seen below. 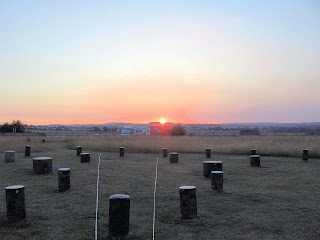 Fig 4: Solstice morning at Woodhenge. The tape on the left represents the axis of symmetry of Woodhenge’s outer egg and points to where the moon will rise at major standstill.


************
Why should Professor Alexander Thom, a brilliant engineer and mathematician, having surveyed Avebury so accurately, complain that he had measured Woodhenge with a stretchy tape?


Why also, when returning home to Dunlop in Scotland did he compensate for that ‘stretchy tape’ by deducting a variety of percentages from his measurements? Why, also, when later living and working in Oxford did he not take the opportunity to return to Woodhenge and check his measurements properly – a simple three-hour job? His datum post, from which he worked, remains in the middle of the site to this very day.


Why also did he not realize that the major axis of Woodhenge actually points at the moon? Again, why did he not seem to realize that Woodhenge gave him the best chance of proving the megalithic yard – his life-long dream?


He must have known; he was far too meticulous a man not too!
Coming next: Stonehenge Simplified.
Posted by Unknown at 14:51 No comments:

It’s a waste of time asking archaeologists what Stonehenge really was because they do not want you to know.
So how long have they known, and when did they first find out?  According to my reckoning they made that fateful decision sometime around 1938 and are now forced into further lies to cover up the original travesty.

Well, I cannot say that I wasn’t warned. “They own the stage, and they say what goes on it - And what does not” as an educated colleague once said. And that goes for the media too!


I set out to solve Stonehenge 11 years ago because I thought it would make me rich and famous… popular even. It did neither - quite the opposite, in fact. But enough of my griping, let’s get on with the job of telling you what Stonehenge really was, and where the proofs came from.  However, if you would rather Stonehenge remain as a mystery untold then this blog is definitely not for you.
Like I said, I started my researches to solve Stonehenge some 11 years ago, and it took me six years to do it - so it’s a bit late to use this blog as a day-to-day diary of events that started in the summer of 2001. Great pity, really, because if I had kept a diary, especially of its immense cost to me - a private individual - I could be looking at a fair sum of money in the form of a tax rebate.


********
I see that English Heritage have wheeled out yet another updated plan-view of Stonehenge - one that has been produced from modern surveys and cannot therefore be a true representation of the original because of the many inaccurate restorations made during the twentieth century. It’s not that I wish to pick fault with the likes of Professor Atkinson, Col Hawley, William Gowland, et al, they did their best with limited resources that were available to them - such as computers, GPS surveys, ground penetrating radar, LIDAR, etc.


Nevertheless, despite the equipment that we possess today, only two surveys remain that portray Stonehenge as it originally was before being messed about by 20th century restorations - that made in 1740 by the architect and professional surveyor, John Wood; and also by the Egyptologist, Flinders Petrie in 1880.
Petrie did nothing to make Wood’s plan more accurate than it already was, other than adding a few extra details that Wood overlooked due to failing light on the last day of his survey. For example, by probing to find the length of the partially buried Altar Stone - something Wood did not do - Petrie came up with a figure that equals six of Professor Thom’s megalithic yards. Petrie also correctly positioned bluestone 72 hard-against trilithon upright stone 60 where it truly belonged. (Wood completely omitted stone 72 of the bluestone horseshoe in his plan - a very unfortunate oversight!) 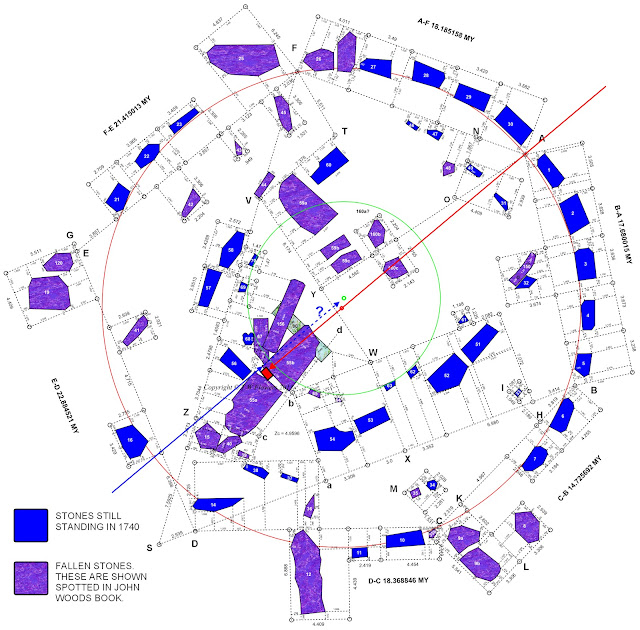 Fig 1: John Wood’s 1740 plan of Stonehenge produced on CAD from John’s own measurements. All measurements shown are in megalithic yards.
I’m not proud of the Time Team, it hasn’t worked. And I’m totally dissatisfied with my time at Bristol University. Archaeology in Britain is a shambles from top to bottom. The forces of darkness and evil are stalking the land again. Professor Mick Aston retired, writing in the British Archaeology Magazine, March/April 2012.
Sounds like sour grapes to me, and I guess there must be some rancid grapes in there somewhere. Personally, I think the Time Team did, and still does do a fine job. I sat glued to the telly almost every Sunday afternoon when they first started and enjoyed every episode.  It was most probably the Time Team that fired my interest in archaeology - especially the archaeology to do with Stonehenge’s underlying purpose.
However, the Stone Age is one area of archaeology that archaeologists continue to lie about, for they do know exactly what Stonehenge was, and has done for a very long time. With archaeologists continuing to stubbornly refuse to bow to the truth, Mick is right about the corruption that is affecting his industry.
A lot of what I’ve said here is very heartfelt, you know. It could get me into trouble. I’m too honest. I say what I think, not what I think I ought to say. It’s a great weakness really. Mick Aston Current Archaeology Magazine, October 2012.
Professor Aston ought to regard his honesty as strength, not weakness, and knuckle down to the task of challenging his colleagues to sort archaeology out - as I recently suggested he should.
So just how long has this cover-up been going on? Best ask them - for only they know. Perhaps it began when they started to suspect that Stonehenge - that great monument of which we British are so proud - was probably designed and built by visiting German tribes. Archaeologists made this discovery just before the commencement of the Second-World-War when Hitler was at his very worst behaviour.
Professor Wainwright is one archaeologist who surely must have suspected that German tribes had had a hand in the design of Stonehenge; because when referring many years ago to the causewayed camps of Windmill Hill near Avebury and Robin Hood’s Ball near Stonehenge… both of which are earlier in date than either the Avebury henge or Stonehenge itself, he said… both are essentially a British phenomenon, although the causewayed camps can be compared with ditched enclosures in the Michelsburg culture.
Well, Michelsburg is a Neolithic hill fort in Germany. The people who lived there made the very first beaker-style pottery that later became widespread when thousands of these beautifully decorated drinking vessels found their way into just about every Bronze Age burial monument of Europe. Unfortunately for history, and historians, the Michelsburger’s disappeared to some unknown place about 500 years before Stonehenge was built; because the Rhine that once circled the base of their fort changed its course and moved several kilometres away.
Causewayed enclosures are by no means the only evidence we have that Stonehenge was built by German tribes.
Baltic amber in the form of trinkets and jewellery has been found in many Bronze Age sites, especially the amber beads that were found at the bottom of the 30-metre-deep Neolithic Wilsford Shaft near Stonehenge. Although located in a slight dip and therefore out of sight of Stonehenge itself, this shaft is in-line with the setting of the minor moon from Stonehenge - and for good reason. We will learn about this later.
Furthermore, Niedermendig lava, a type of stone mined from a quarry near Frankfurt, and absolutely unique to Germany, has been found buried inside Stonehenge. It has also been found at a Neolithic settlement-site alongside Avebury’s West Kennet Avenue of paired stones - and at Avebury’s Sanctuary to which Avebury was physically linked.
These finds of Niedermendig lava prove a common hypothesis for the Stone Age. So whatever it was that was going on at Stonehenge was also going on at Avebury. We cannot prove one without considering the other.
Then, in 1956, Professor Alexander Thom discovered something that threatened to bring the whole house of cards crashing down - Woodhenge was a moon-egg intended to be fertilised by a shaft of solstice sunlight.
The Real Woodhenge